BMX: How did it start?
Like a lot of popular trends, BMX biking emerged from the sun-kissed shores of California, where, back in the 70s, teenagers would put their bicycles (often these would be contraptions which resembled the likes of the ‘Raleigh Chopper’) through their paces across crudely constructed dirt-tracks;

Motorised dirt-biking was pretty big back in the day, so it was only natural that, kids being kids, attempts to emulate the stars of the day would result in ever more advanced tracks being constructed, for the sole purpose of off-road racing.

As the 70s got off to full swing, so too did the new off-road bike racing craze: what started as a fun motocross imitation, soon became a nationwide movement across the USA: later, this would be given its current name: BMX biking, which is an abbreviation of ‘Bicycle Moto-Cross’; 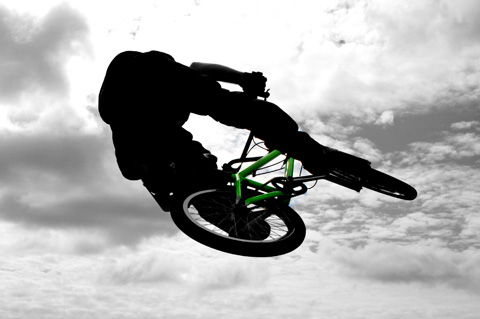 The emergence of a new sport
Soon, the popularity of BMX biking took off to such an extent that manufacturers soon jumped on the chance to design and build new, custom-made bicycles specifically for this sport, which would later go on to replace the customised kids’ bikes which were previously used.

By the early 1980s, the International BMX Federation was established – an organisation which held the first BMX World Championships, marking the beginning of a new era in the emergence of this sport;

Urban riders join in the fun
Almost in tandem with the emergence of dirt-track BMX events, urban kids across the world started to ride through city streets on the stunt bicycles;

The addition of axle foot stands meant that new, increasingly daring stunts could be devised, such as grinding down stair rails or resting ones feet on the stands to rotate the frame under the body.

With both urban and off-road tracks being possible locations to practice this sport, BMX exploded well into the 21st Century: by 2008, BMX became an Olympic sport: not bad for an event which has such humble roots.

What are modern BMX bikes like?
BMX bikes are small, low-slung bicycles with small-diameter wheels, giving them the appearance of miniaturised MTBs: they are typically made from similar materials to mountain bikes, with Chromoly steel and Aluminium being popular choices used by manufacturers;

Wheels typically range between 18” and 22”, with most riders choosing varieties with 36 spokes; however, larger and smaller sizes are available as are variants with even more spokes, for those in need of additional strength.

Todd Fiedel is an extreme sports fan who likes nothing more than hitting the track with one of his prized BMX bikes.