The Cutty Sark is arguably the most famous ship in Britain. She has travelled all around the world and held, for ten years, the fastest travel time between Australia and Britain. The Cutty Sark was built on the River Clyde in 1869 as a tea clipper, destined to join the tea race between Britain and China. Due to the development of steam vessels however the ship didn’t stay in the tea race for long and after a few years was moved to the wool trade of Australia, where she set the record as the fastest ship to travel between the two countries. 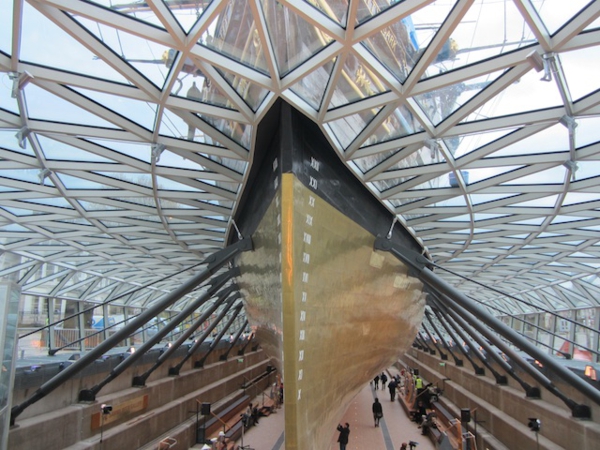 As the steam ships continued to be developed, it wasn’t long until they also took over the route to Australia; at this point the Cutty Sark was sold to a Portuguese company and renamed Ferreira. In Portugal she continued to work as a cargo ship until she was purchased, in 1922 by Captain Wilfred Dowman. With this movement she was used as a training ship in Falmouth and in 1938 she was transferred to the Thames Nautical Training College and was used – as well as HMS Worcester – as a cadet training ship. In 1954 the Cutty Sark was moved to her current location and has since been on public display.

The Cutty Sark , along with two other ships in London – HMS Belfast and SS Robin – has been classified as the equivalent as a Grade 1 Listed Building on the Core Collection of the National Historic Ships Register.  The ship is within a group of three remaining clipper ships that have the original wooden hull on an iron frame.

In 2007 however, the ship was almost destroyed by fire. However it was later found that most of the original timbers that made up the vessel’s structure were not on board at the time of the fire, as they had been removed for restoration work that had already begun. It took five years of restoration work before the Cutty Sark was fit enough to go back onto public display. As a museum ship, after the fire, arrangements were made to raise the ship three metres into the air; this was to enable a museum space to be built underneath so that people could marvel at her design from below.

Why don’t you consider a visit to the Cutty Sark, on the edge of the River Thames and while you’re there you could take a boat trip down the river itself. London boat trips are one of the most popular attractions that allow you to see the whole of London, both day and night.

This article was written by Jason Smith. If you require boat hire London, he would recommend www.thamesboathire.co.uk.