The GPS specialist Garmin has just announced a new watch which is aimed at outdoor enthusiasts such as climbers, hikers and geocachers. The new Garmin Fenix has extensive navigation features equal to those of a GPS outdoor handset, and thanks to the altimeter, barometer and compass functions it is ideally suited for use in the most adverse of weather conditions.  The Garmin Fenix offers GPS navigation on the wrist and can help you to move along tracks and waypoints.  On the watch face you will see the current route and when you need to turn, a beep or vibration will sound.

There is also the TrackBak function will helps users in finding the way back to the starting point should they get lost on the trail. 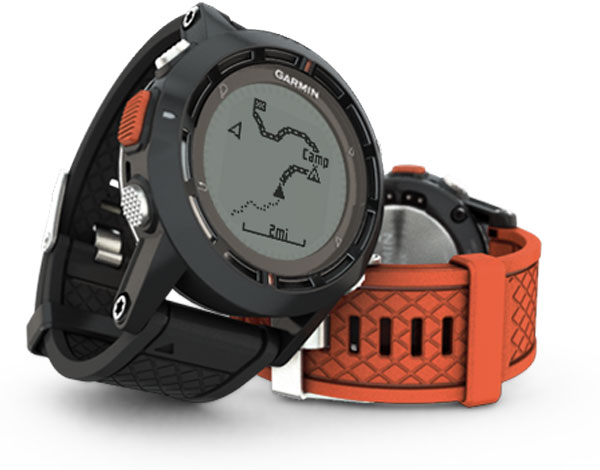 Create Waypoints and Tracks for Navigation
Tracks can be managed directly on the Garmin Fenix watch and it is also possible to create new waypoints using the built-in barometric altimeter, which is calibrated as the 3-axis compass automatically based on the GPS data.  Unfortunately there is no touch screen capability and the operation of all the Garmin Fenix functions are done via side control buttons

Can Also Be Used by Runners and Geocachers
The Garmin Fenix has several different data functions which allow the user to view different kinds of information. The user has the choice of over 50 different values, such as time, distance to destination, direction and current altitude. Those who do not go hiking or mountain climbing can instead use the Garmin Fenix for running as it also includes the functionality from the Garmin Foreunner running watches including parameters such as pulse rate and pace.  The Garmin Fenix is also suitable for geocachers as it offers paperless geocaching features.

View Maps Using the Garmin BaseCamp Software
Since the new Garmin Fenix uses a two-tone black and white display, the display of map is of course impossible.  However, saved waypoints, routes, or tracks can be sent over the Bluetooth interface of the watch to a smartphone where the user can then view the data via an overlayed map using Garmin BaseCamp software.

Durable and Hard Wearing Wrist Watch
The new Garmin Fenix is designed to be durable.  The GPS watch is housed inside steel-reinforced plastic for the display and then a scratch-resistant mineral glass watch face.  It’s water resistant up to a depth of 50 meters and the battery life is 16 hours in GPS mode – although this extends to 50 hours if you switch the GPS receiver off.

Will Be Released in September on General Sale
Garmin plan to bring the Fenix to sale in September of 2012 with prices starting around $399 US Dollars, with Amazon already taking pre-orders. It is set to revolutionize the way in which outdoor adventurers use GPS and coming from Garmin is bound to be very popular.   For more information about the Garmin Fenix please visit this independent website which lists all the best Garmin Fenix Reviews & Prices for 2012.