Posted in General
Author: Lizzie W  Published Date: June 24, 2019  Leave a Comment on The Gold Rush: How and Why Did It Happen? 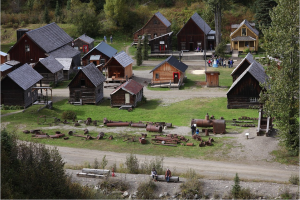 The Gold Rush is an infamous movement from the mid-1800s. It is an event that gave us blue jeans, the song “Oh My Darling, Clementine,” and major technical advances that were funded by this influx of newfound wealth. What were the Rush’s origins?

The craze began in 1848. James Wilson Marshall was the first to find the little gold flakes that would become a national phenomenon. At the time he was working at a mill near the American River that was owned by John Sutter. Marshall initially doubted his discovery. Marshall later stated that he had a gut instinct as to what it was.

Sutter and Marshall were rightly concerned about the effect of what Marshall had found. They partnered together and attempted to keep quiet. Despite these efforts news somehow got out. Sutter’s property was soon overrun by would-be fortune hunters trying to discover more gold. They were dubbed the “forty-niners” because they arrived in 1849. These dreamers were quickly confronted with reality. The miners’ camps were little more than lawless colonies. Violence was the name of the game. Few actually struck it rich. Even Sutter himself was bankrupt by 1852 after his property was essentially destroyed by the miners.

The Gold Rush was a key element in shaping California. California was named a state in 1850, not long after the Gold Rush was reaching its peak. It also deeply altered California’s demographics. Miners from all walks of life flooded the state. Some had even sailed all the way from Europe. An estimated 30,000 miners arrived in California in 1849. Most of them were inexperienced. Panning for gold (or “prospecting”) was incredibly tedious. You had to dig very deep into the sediment to even begin to find something. Gambling was pervasive and unfortunately meant most would lose their earnings as quickly as they’d come. However, the Gold Rush did contribute to new technology, such as hydraulic mining, that was developed out of necessity.

Gold and its Value Today

Gold is now often used as a “hedge” against inflation or a risky stock market. This can mirror the speculative nature of the Gold Rush era. These days, though, gold is typically checked for purity before it goes on the market. The resources to discover more about gold are much more plentiful today. Perhaps then their expectations would have not been quite so high. If only the miners of the 1840s had had that institutional resource. Not all rocks contain a flash of glistening fortune.

It is fascinating how a fad can take over an entire culture and create a new one. The Gold Rush is one such example.