Posted in Business
Author: Editor  Published Date: October 1, 2012  Leave a Comment on The History And Evolution Of Neuro Linguistic Programming

Introduction
Neuro Linguistic Programming, or NLP for short, has been around since the 1970s and has since then evolved from just a few people studying the practice into hundreds of people every day learning the different techniques and methods. The history of Neuro Linguistic Programming is a fascinating one, with the evolution of the study growing more and more each year. 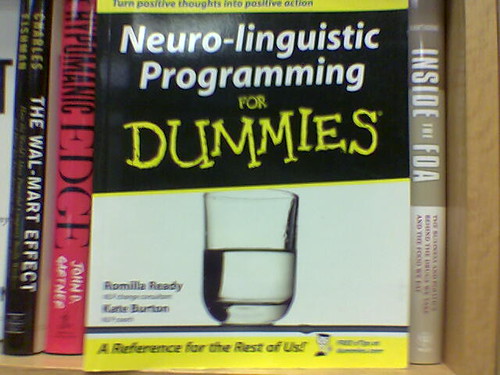 Early history of Neuro Linguistic Programming
Noam Chomsky was a practitioner in Gesalt therapy and it is said that the earliest foundations of NLP actually came from him as he studied various different linguistic therapies. He was not a NLP practitioner, however as his research was predominately into the theory of language and not to be used for therapy.

At the beginning of the 1970s, Richard Bandler who had originally studied computer science and mathematics at the University of California changed his major to behaviour sciences when the subject caught his eye. He then became friends with a lecturer of linguistics named John Grinder, which is why many people believe NLP was formed by a computer programmer and a linguist.

Together, Bandler and Grinder studied Fritz Perl’s taped therapy sessions which were using Gesalt therapy, where they noticed that particular word patterns and sentence structures were more accepted than others in terms of Fritz Perl’s therapeutic persuasions. They also used a second therapist’s tape recordings, Virginia Satir, to further study the use of language in therapy.

The two men began to run workshops and various study groups around the teachings of Perl and Satir, based around Gesalt Therapy, before working together to create syntax of behaviour based around their learnings.

The Structure of Magic and the NLP models
Bandler and Grinder began to come up with their own ideas on what techniques or methods would help people overcome certain problems. These ideas were then documented in a series of books named ‘The Structure of Magic’ and several volumes were released.

The Meta model, the most well known technique in Neuro Linguistic Programming, was first introduced in 1975 in the first and second volume of The Structure of Magic books. Referring to the therapeutic work that Perl and Satir had conducted as ‘magic’, they believed that by breaking these learning’s down into a structure, it could then be taught to others using appropriate models.

Neuro Linguistic Programming Today
Since the late 1970s, NLP has been used as a way of effectively communicating with others, as well as getting a better grasp of the language people use in certain situations. This was continually built upon all throughout the 80s and 90s to become more and more advanced.

By the 2000s, Neuro Linguistic Programming had grown into a giant, being used for a variety of different types of therapy. People turned to NLP to help them overcome confidence issues and phobias, or to become more positive and to achieve their goals.

NLP is now used in a range of different ways, from training in the workplace such as management or leadership training and even for celebrities or public speakers who wish to combat their nerves before going on stage. The growth and evolution of NLP now means that more and more people are becoming practitioners in the subject, learning the skills and techniques for themselves before passing them onto others.

Neuro Linguistic Programming has been around for over 40 years now, with more ideas, techniques and methods being researched and improved all the time. This type of therapy has become more popular for those who wish to better themselves, become more confident, overcome fears and phobias or who just wish to have a more positive outlook on life in general. With the constant development of NLP, more people are looking at studying to become a practitioner, so that they can be involved in a truly revolutionary type of therapy which will change their lives, as well as the lives of others.

Rebecca Walton writes for Edge NLP and recommends you Visit an NLP Website by Edge for more information.