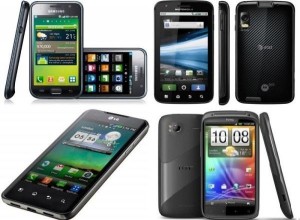 The movers and shakers in the cell phone industry are seeing double — and that’s a good thing! Talking about smart phone growth is a moot point; anyone living in the first world is aware that smart phones have taken over as data plan prices have fallen. People use them to manage their schedules, careers and even their love lives. As smart phones become an essential part of more peoples’ lives, they become more diverse with applications for just about everything you can imagine. Those apps are becoming more sophisticated and require a bit more power than standard single core phones can handle.

What is a dual-core phone? Just like your computer, every smart phone has a CPU, or processor. The processor is the brain behind the “smart,” allowing the phones to move and process data while performing all the tasks that make them so much fun, like playing games or the app that tracks your sleep cycles. In addition to processor-intensive applications, smart phones are running more processes in the background and those are slowing down phones across the nation.

It was bound to happen

Dual-core smart phones were the natural next evolutionary step in smart phone technology. They are key to the high-end market, but they’re not the gold standard, at least not yet. According to a recent article in Forbes, dual-core processors only make up about 20 percent of the total market right now, though they are gaining traction. Of course, like all thing high tech, it’s only a matter of time.

This is where Qualcomm, with its LTE-integrated dual-core Snapdragon, can make significant headway in the dual-core market. As LTE becomes more popular in the developed world, consumers will demand more power-efficient and sleeker handsets than the ones currently available. Samsung will then have to either come up with its own LTE-integrated chipset or rely on Qualcomm’s. Samsung already uses Qualcomm’s LTE solution in its Galaxy Note for AT&T. (Source: Forbes)

As smart phones incorporate more and more features, the need for dual-cores will naturally rise. The article makes the point that Qualcomm is in a very good position with its SnapDragon processor, an LTE integrated chip, is ready for the market. Samsung is currently on top of the multi-chip processor game, but Qualcomm is also home to a mobile development wing that is driving application innovation and will likely sit well in the SnapDragon environment.

Brew MP is a gateway for building the more advanced applications that need the big brainpower of those high-end, dual-core smart phones we’ve been talking about. With Brew MP, an app developer — or even a company wanting to develop some apps of its own — can create, debug and distribute applications that will be snapped up for use by consumers on their smart phones.

You may not be ready to ditch your single core smart phone right now; it might be capable of doing everything you ask of it. But it’s always fun to see what’s brewing on the horizon. Faster, smarter phones are on their way, and each one will have a dual-core processor packed into its brain.