The Royal Flora Ratchaphruek was an enormous and famous flower festival, which took place in the city of Chiang Mai, Thailand, from November of 2006 to the beginning of 2007. Drawing almost 4 million visitors, this epic flower festival was centred around the Ratchaphruek flower, which is recognised as the national flower of Thailand. The Ratchaphruek, or Golden Shower, is a beautiful flower which grows on a fairly large tree and blossoms in the spring. This flower is particularly stunning as the plant has hardly any leaves and the bright yellow flowers hang directly from the branches in abundance, hence the name Golden Shower. Often seen by roadsides, this flower is particularly symbolic as yellow is the colour of royalty in Thailand and the King of Thailand is very close to the hearts and minds of all Thai people. It is because of this colour, as well as important medicinal properties of the plant, that it has become the national flower (and also tree) of Thailand. Some also consider the fact that all these trees blossom at the same time to be symbolic of the unity of Thai people. 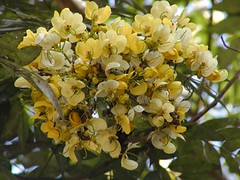 Hosted By His Majesty The King

The Royal Flora Ratchaphruek flower festival was actually hosted by the government of Thailand, in honour of King Bhumibol Adulyadej, the long-standing King of Thailand. Set in 200 acres of land near to Chiang Mai, this 90 day festival featured many different plants and flowers from all around the world. Indeed it was truly an international festival and earned the “A1’ badge from the AIPH (Association of International Horticultural Producers), which is the highest award such a festival can achieve.

Probably the most important of all the attractions was the ‘Gardens for the King’. This consisted of two parts – the International Gardens and the Corporate Gardens. The International Gardens were filled with displays from the horticultural associations of many different nations, with all their own native flowers, celebrating unity, cooperation and peace amongst the varied nations of the world. The Corporate Gardens, despite the unusual name, was a beautiful mix of displays donated by Thai companies, state offices and some international corporations.

There was also a royal pavilion, which was constructed in the Lanna style – an old architectural style from ancient northern Thailand, and which contained a gallery of photographs and evidence of the King’s hard work for his people over the years. This display was the centrepiece of appreciation for the King and was by far the most popular part of the festival.

Finally there were also many varied cultural shows, tropical gardens, flower vendors and of course a fantastic array of international cuisines, souvenirs, arts and crafts and many, many more attractions.

Investment in the Thai Economy

At the end of the festival, it was calculated that the event had injected as much as 27 billion baht into the nation’s economy (source Wikipedia). The government were expecting only 3 million visitors but received almost 4 million, with some of the busy days seeing more than 100,000 visitors at the same time, way exceeding expectation.

Since the festival, the site has been transformed into a horticultural training and learning centre, making best use of the land and facilities set up for the festival. Indeed the site is still open to the public today, still containing many of the original exhibits and is now one of the famous landmarks of Chiang Mai, receiving around 500 visitors every day.

I am Nok, a freelance wrter with a keen interest in flowers. I am married and have two children and one granddaughter. We live in Bangkok.