To play this game, your Mac should be running Mac OS X 10.5.8 or newer and have at least an Intel Core Duo Processor. 2 GB of RAM are needed; at least 6.3 GB of space should be free on the hard drive. Several video cards are compatible, but there needs to be at least 258 MB of video RAM. The game is not compatible with the Power PC based Mac system or GMA class integrated video cards. 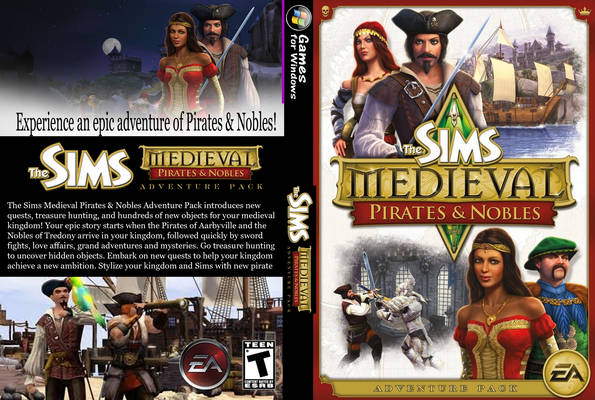 Essentially an expansion pack for the existing Sims game, The Sims Medieval: Pirates & Nobles is a short pack that ads a few new elements. Playing exactly like the other Sims games, this expansion pack ads new wardrobe items and other goods, but there is one new element added to the game play: treasure hunts. In treasure hunts, your Sim pops from place to place while following a treasure map. This is a bit disappointing as the treasure is a bit bland and pedestrian. After trying this new feature, it seems that the game is more fun if it is ignored all together.

This new Sims title brings a new chain of missions. Once these missions are done, much like with the treasure hunt, there is little reason to pursue them further. While The Sims Medieval is a pretty quality game, it goes by a lot faster than you expect. As a full-fledged expansion pack with a price to match, you would expect to get a bit more gameplay. Bugs that exist in other Sims titles plague Pirates & Nobles as well. NPCs sometimes get stuck after you quit and return, and this can happen to characters as well. The only fix for this right now is restarting the game, which isn’t a real solution.

This Sims game gives the same graphics quality of the other titles. It looks just like the others, with the exception of thematic items and apparel. None of the new content is particularly notable, but it still looks very good. Areas can still load through levels of detail slowly, as with other versions, but it should be said that they look good when they finally load.

It should be no surprise that there are no major sound changes with this release. Much sounds the same with no real differences between the main game and this new expansion pack. There are some medieval sounding music in the background, and this is probably the most notable change.

With so few differences and variances from the main game, this expansion pack doesn’t seem like that great of a deal. There isn’t very much new content, and the new content that is there is a bit light and doesn’t add much to the game. Gameplay goes by a bit too fast with Pirates & Nobles, and it feels more like a skin than a legitimate expansion pack. With the same bugs and same presentation, this game isn’t a very good choice, unless it is being sold for a deep discount.

Benjamin is a blogger, tech geek and a member of mac-how community.