Posted in Home Improvement
Author: Editor  Published Date: October 27, 2012  Leave a Comment on The Strangest Places To Live On The Internet

Sometimes being a writer for the Internet is hard work. For instance, not many websites actually have a budget for pictures, which means that if you want to illustrate an article you need to find pictures under a creative copy licence that are free to use for commercial purposes.

This means that, if you want to, say, write an article about people who have built weird houses, for instance, you need to first find pictures of those weird houses that are free to use. Since most of these pictures don’t have much in the way of actual explanation, that means that as a writer you’re forced to, well, make stuff up.

So, using the height of my Internet powers, here is my best guess as to what each of these cool looking houses is actually, well, for.

This building is a weird mixture of boat and house, although I’m not sure that it would be possible to sail it, or live in it. We can only assume that somebody got a message from God that a great flood was going to wipe out mankind, and that he was ordered to collect two of every kind of Hipster and put them in a stylishly ironic house boat where they would be the first to drown.

The person who photographed this house was helpful enough to include a Google maps link so you could find it for yourself. Which is a shame really, as anyone who is capable of building a semi-underground camouflaged rock bunker (admittedly one with French doors) clearly, A: Doesn’t want to be found, and B: Has the expertise, money and resources to kill you and get away with it. 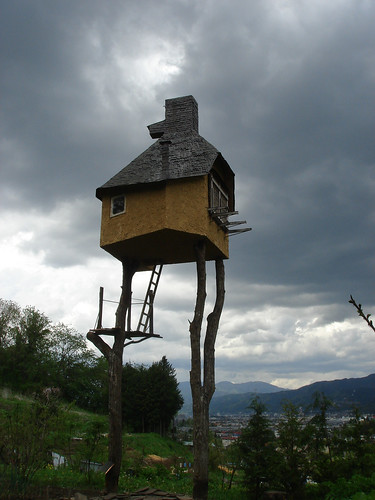 There was literally no information on where this house came from or why it exists, so we’re forced to make some really wild guesses here. So here are my theories. Theory number one: Somebody’s family was eaten by wolves. They built this house so that the wolves would never be able to hurt them again. Theory number two: Primitive Martians making their first attempts at constructing robotic tripods to destroy the city of London (see below). 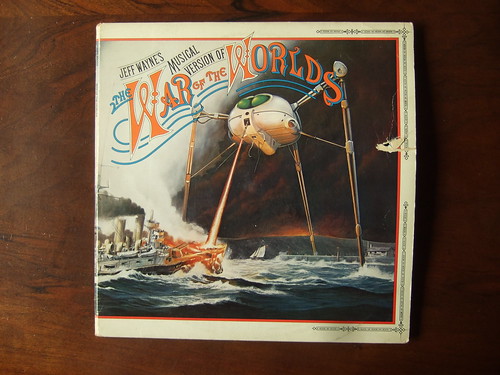 Theory three: The house itself has become self aware and decided to walk off into the sunset seeking new sights, sensations and adventures. 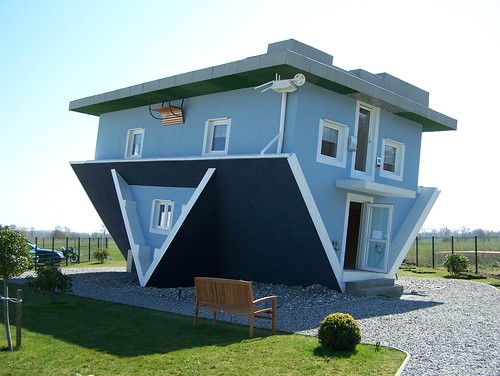 This house suggests so many great ideas. Giants getting fed up during a game of Monopoly and sweeping the board clean. That old man from Up! accidentally bursting all his balloons in mid-flight. Builders trying to build a normal house but looking at the drawings upside-down. A mad scientist and double-glazing salesman for Anglian Windows is simply trying to lead a normal life after an experiment with an anti-gravity serum went horribly wrong.

So it’s almost disappointing that this is one of the few pictures I found that came with an actual explanation. The Weltstehtkopf, or “The world is upside down” in English is a tourist attraction in Germany. Unsurprisingly its creators came up with the idea in a pub. Not only is it upside down on the outside, inside everything looks like you’re walking around the set of Inception. Check out the website for some even weirder pictures.

Of course, this house loses points for anyone who knows how to stand on their head, as then it looks like just an ordinary house.

Chris Farnell is a freelance writer. He would happily live in any of the places listed in this article.