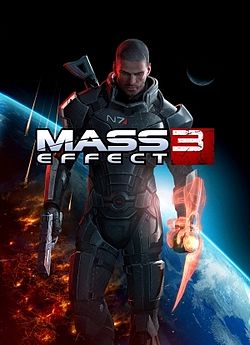 Mass Effect was a space RPG about killing a flying robot god – a Reaper. Mass Effect2 was about stopping one from being built. In Mass Effect 3 they’ve warped in from darkspace in their hundreds. Trying for the best of the two previous games, it’s an urgent and galaxy-critical plot that directly involves the entire crowd of oddball personalities the series has built up. And it works.

Inside 20 minutes, you have a crucial goal and a clear route to achieving it and, unlike in Mass Effects 1 and 2, every sidequest and adventure is connected to that.

The most radical and effective change to the RPG side of combat is the ability to choose your own balance of weapons and abilities. Any class can now take one of each weapon type into a fight, but the more you carry, the slower your powers recharge. The fights are also more complex and less repetitive, thanks to a lot of smart interplay between enemy types.

The low points of the combat are the bigger boss fights, which too often involve one- or two-shot kills that hit you almost instantly and seemingly at random.

In single-player, everything you do accumulates ‘war assets’, so when you finish the game, how many of these you have determines how good an ending you get. Success in co-op multiplies your war assets, so you’ll get a better ending more easily.

The end of the series is a mixed bag – satisfying in some ways, nonsensical in others, and ultimately too simple. But the sheer scale of the adventure it’s ending – and the music, which is gorgeous throughout – gives it an emotional impact that goes beyond its plot payload.

Miles Kilo is a murderous agent gone rogue. This rebellion is simplified by a chip implanted in his head, which gives him instant, streamed access to a weaponised version of the internet.

Kilo has three main combat skills: Suicide, Backlash and Persuade, the latter of which convinces an enemy to join your cause and kill his friends, before turning his rifle on himself. All are darkly funny, but not useful enough to replace sustained gunfire.

Syndicate is riddled with oddly tough difficulty spikes, but standard fights pale in comparison with the face-punching frustration of the game’s bosses. You’ll come to rely on its best feature: press [Q] and Kilo’s view switches, giving him a grey and orange vision of a slowed down world. This DART Overlay mode, as it’s known, makes targeting much more accurate.

There’s more fun to be had in co-op. This plonks you in as one of four agents sorting out various corporate messes across the globe. Players conform to one of three archetypes – assault, defence or support – but loadouts can be customised with different weapons and abilities.

Cannon Fodder 3 isn’t the gung-ho top-down shooter it appears to be, where death is cheap and there’s always more meat waiting to be thrown into the grinder. As in the original games (released in 1993 and 1994, respectively), you have to be precise and tactical to stand a chance. Doing so, however, turns out to be a very different experience from before. It’s far less satisfying, if admittedly nowhere near as frustrating.

The key problem is the fragility of your men compared to your enemies. Other soldiers are equally squishy and pose little threat, but a single rocket turret can easily annihilate a whole squad in one shot.

The only way to survive the long levels is to play with aching, paranoid care, picking away at base defences from as far as possible, and taking care to trigger every save point.

Despite ultimately going its own way, CF3 does have a solid crack at updating the action for a new age, and it’s not nearly as bad as expected. That said, it’s too different to be an all-out nostalgia trip in anything but name, and a poor substitute for more focused action or strategy.