Putting together a ‘bucket list’ of places to see before you die is difficult. Narrowing down any list of this kind is going to involve leaving out a number of locations that would represent must see choices for many people. However, by trying to be as broad as possible, and by thinking about the particular appeals of locations, it is possible to narrow down some locations that should be at the top of anyone’s ‘bucket list’. These places range from sites of natural wonder through to man made monuments that need to be seen in person to be truly appreciated. The following places consequently represent, in no particular order, some key travel locations: 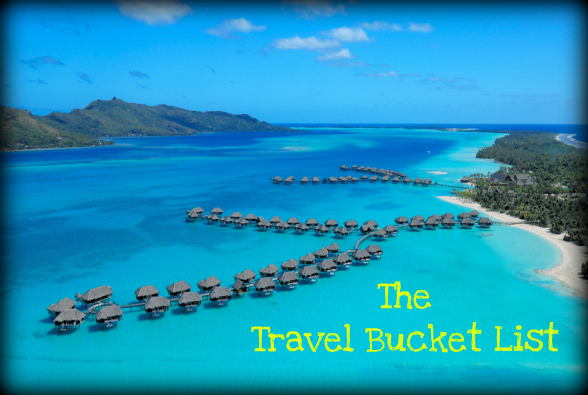 Visible from space, the Great Barrier Reef is found off the coast of Queensland in Australia. The coral reef hosts thousands of marine species, and is attached to a Marine Park that promotes eco friendly tourism, and tries to restrict environmental damage. The reef’s clear waters make it particularly recommended for being able to see whales, dolphins and turtles in their natural habitat. The Reef has had a long history of human use, having held a crucial important to the Aboriginal Indians and the Torres Strait Islanders.

An Incan city site that has long been associated with some of the best examples of architecture in the world, the site sits 2,500 above sea level on the Amazon. A rich floral site, the Incan city is made up of a series of slopes and plains within the Cusco Region of Peru, and forms part of the Urubamba Valley. The estate was built in around 1450 by an Incan emperor from dry stone walls, and held a strong ritualistic appeal. Tourist access to Machu Picchu is limited, with the site only accepting 2,500 visitors a day.

Impossible to reach by road, the Glacier Bay National Park in Alaska is a UNESCO World Heritage Site and one of America’s finest parks. West of Juneau, the site covers 600,000 acres, and hosts a wide range of ecosystems around the Alsek River. The National Park has also acted as the homelands for the Tlingit peoples. Access is generally allowed by ferries from nearby Gustavus, and by plane.

Still one of the world’s greatest man made wonders, the Taj Mahal in Agra was built by Shah Jahan as a tribute to his wife Mumtaz Mahal, and stands as a symbol to the Mughal Empire, and as one of the finest examples of Muslim art. With 130 ft tall minarets, and decoration that includes rare gemstones, the Taj Mahal is adjacent to the walled city of Agra, and is protected from pollution.

An archipelago near to Ecuador off the west coast of South America, the Galapagos Islands’ natural beauty and dense wildlife made them a crucial case study for Charles Darwin’s theory of evolution. The 14 main islands include everything from hawks to sea lions, and lava lizards, and is heavily protected as a conservation site.