He is the most famous of the ancient Egyptian pharaohs, and his gold burial mask has been travelled all over the world as a show of the opulence and wealth commanded by the rulers who viewed by their people, and themselves, as gods.

Tutankhamun’s tomb was discovered in 1922 by British archaeologist Howard Carter after lying undisturbed for nearly 3500 years. The discovery received extensive coverage by the press and renewed interest in Egyptology.

When Carter discovered the four chamber tomb he saw that it was filled from floor to ceiling with unimaginable riches – gold, bracelets, daggers, necklaces; precious stones, jewellery, weapons and musical instruments; all of the belongings that would accompany King Tut to the afterlife. 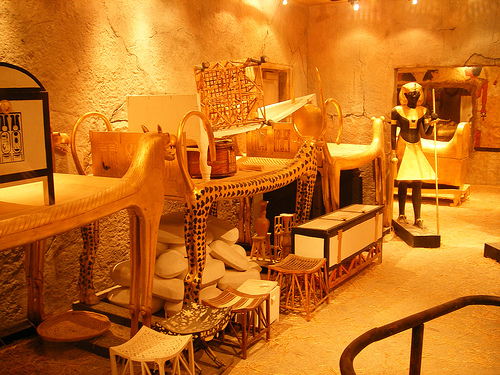 The boy king was the 11th pharaoh of the 18th Dynasty and had died in his late teens having ruled since the age of eight or nine. His father, the “heretic king” Akheaten had imposed reforms on the kingdom, banning the worship of the traditional gods, which left cults abolished and the temples in ruins. He replaces the traditional deity Amun with the solar god Aten.

Born Tutankhaten in honour of the sun god Aten, after he took the throne, three years into his reign he re-established the worship of Amun and changed his name to Tutankhamun.

His reign as pharaoh is thought to have has little importance in the history of but monuments he built and the treasures he was buried with would suggest different.

Open until the January 1 2013, a there is a taste of the desert kingdom in Scandinavia with the Tutankhamum exhibition at the Malmö Expo Center in Malmö, Sweden.

The exhibition is a 4000 square metre event with a grand reconstruction of the treasure filled tomb, with 1000 object to give visitors a taste of the boy king’s reign. The exhibition has travelled all over the world to the acclaim of thousands, and at Malmö is the most complete it has ever been.

It is hoped that the exhibition will be a boost for Swedish tourism, and is a must see for anyone visiting Sweden. While a majority of travellers wil be heading to the capital, if you fancy taking the trip south to Malmö the staff at your hotel in Stockholm will likely be able to give you the best advice.

For more information on what there is to do in Stockholm, look here and make your trip to the Swedish capital a little bit different.

Catherine Halsey writes for a digital marketing agency on a range of subjects. This article links back to http://www.radissonblu.com/royalvikinghotel-stockholm