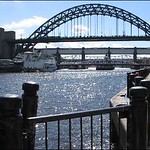 The British Construction Industry Awards were held in London on October 10th, and one of the UK projects to scoop a prestigious award at the event was the Tyne Tunnel. What is the story behind this remarkable development, and what made it worthy of this countrywide recognition?

About the Tyne Tunnel

The Tyne Tunnel, situated in North East England, is a two-lane toll road running under the River Tyne. The tunnel effectively connects the towns on the river’s north bank (North Shields and Howdon) to the town on the south bank (Jarrow). The subterranean tunnels are connected to buildings on the surface via an elevator and two escalators.

The construction of the Tyne Tunnel was initially completed in 1967, but the award-winning project was completed in November 2011. Following the completion of the second tunnel, the official opening by her Majesty the Queen took place in July this year.

The project included the addition of a new 1.5 km immersed tube tunnel for vehicles travelling under the Tyne, as well as the refurbishment of the original tunnel, ultimately providing motorists with the convenience of two lanes for traffic in each direction. The refurbishment and expansion of the Tyne Tunnel was commissioned by the Tyne & Wear Integrated Transport Authority. The principal director of the project was High-Point Rendel, and Bouygues Travaux Publics acted was the principal contractor. The resulting development, dubbed New Tyne Crossing, was completed at a total cost of £260 million, and has helped to make transport and commuting in the North East a smoother, quicker and easier process.

Project director for the Tyne & Wear Integrated Transport Authority, Paul Fenwick, told press that the Tyne Tunnel’s civil engineering award was “a tremendous compliment to the dedication and skill of so many people who worked on the project and who delivered it two weeks ahead of schedule”. Mr Fenwick thanked the local communities for their support of the Tyne Tunnel project, adding that they “should be proud to have national recognition for such a piece of civil engineering excellence on their doorstep.”

Nicky Warner is a UK blogger who spends most of her time behind a keyboard, but inspirational projects like this one make her eager to don a pair of overalls and get stuck into some DIY jobs around the house.