Amps come in all shapes and sizes – both for electric guitars and acoustic guitars, as well as bass guitars but they will all be one of four types: vacuum tubes (called valves in the UK), solid-state (transistor), hybrid (these have a tube pre-amp and a solid state power amp) and digital (these have preset ‘models’ of well known amp sounds in them).  There are different brands, sizes, designs, power output and features as well as a variety of price bands. 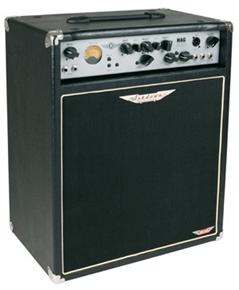 Tube Amps
Tube amps were the first guitar amplifiers and have a rich, fat tone.  They generally sound louder than solid-state amps of the same wattage. Most tube amps have separate channels that can switch from clean to distorted tones instantly.  Over time though the tube performance can deteriorate so occasionally the tubes will need changing.  Most experienced guitarists think that amps with valves sound the best.

The solid-state amp is lightweight and came next.  They are known for being sturdy (not often needing repairs) and easily transportable.   They have more range and generate more power.  They often have a very clean tone but many come with ‘distortion’ channels as well.

Digital Guitar Amps
Digital guitar amps rely on preset digital models and are designed to create the sound of classic amplifiers.  They are programmable so offering a wide range of effects and sounds.

Hybrid Guitar Amps
Hybrid guitar amps are a mixture of solid-state amplifiers and tube amplifiers.  The tube is in the preamp which can produce a warmer sound but with a solid state power amp they will distort as much or produce the same sound as a full tube amp.

Combo or Separate?
Amplifiers also come in different configurations – combos and heads/cabs.  A combo is a cabinet with the amp and speaker combined in the same unit.  Otherwise the amp head and speaker cabinet are separate units and so are connected by cable.

Amp Features
Most amplifiers will boast a range of features from the basic tone controls to sound shaping via gain, distortion, presence, reverb etc. The digital amps allow you to get that classic sound without buying the classic amp and can come with many added controls. As with guitars, experienced players prefer the classic build and sound of amplifiers from the 50’s and 60’s….

Tone & Sound
Every amp has its own tone/sound and different amplifiers are made with different styles of music in mind.  You will come to know what style of music you wish to create and the tone/sound you want to achieve narrowing down the choice of amplifiers that are right for you.

There can also be a difference in the traditional UK and US amp sound – Marshall versus Fender versus Vox for example – each of which has a distinctive sound. The large manufacturers produce a range of amps across the four types with corresponding price tags – a small solid state amp can be less than £100 and a custom built valve amp £3000. There are also many boutique amp builders who hand make a few (expensive) amps a year.

Choosing the Right Amp
For many guitarists it is the case that you just want practise at home so you will need an amp to suit those needs i.e. one that is not going to be too loud.  Usually you may have one to practise with and another to perform with.  At home you’d probably want to find a used amp for sale of between 5 and 15 amps, for small venues 30 to 60 watts and at bigger size venues (large stage) 100 watts although they may have a PA system as well.

Paul Holmes is a passionate guitar player and collector. When he’s not playing on, tuning or blogging about guitars he’s running yournextguitar.com