For many people, steam enclosure is just a small scale sauna that they can fit right inside their bathrooms and that is true in a way. The two fixtures both have mechanisms which produce heat and are made of an enclosed space which keeps the generated heat inside. For the most part, a steam enclosure is used as a good way of winding down a stress work day and the same thing goes for the sauna. But the two fixtures have more to them than just a simple way of loosening tense, rigid muscles and that is something that most members of the general populace are not aware of.

A Way of Life For Some
For those people who live in cold countries where they have snow for most part of the year, the steam sauna is a way of letting the body produce sweat. Perspiration is an integral part of the body’s natural functions that if the person goes for a long time without perspiring, he might find his sweat glands clogged up. That occurrence can lead to very dry skin since perspiration is the main thing that keeps our skin moisturized. A further worry when you have dry skin is that it gets chapped and might easily break when stretched. Hence, those people who live in cold countries make it a point to luxuriate in the heat that is generated by a steam sauna every so often so they can keep their skin moisturized even under extreme weather conditions. 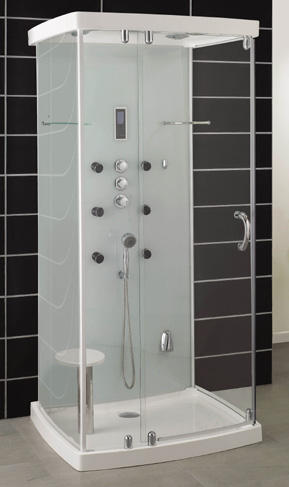 Another unheard of effect of using a steam enclosure is its ability to speed the process of flushing out unwanted toxins from the body. Just to be clear, the steam enclosure is not really responsible for this incident. Instead the heat that is coming from the steam sauna warms up the person and rises his body temperature. When this happens the blood flows faster around the person’s body which is the result for heightened heart rate. During this event, every internal process that is happening inside the body is hastened so the normal process of flushing out bad toxins is also accelerated. And since among the excretory organs of the body it is the sweat glands that are most at work, the toxins are driven by the blood to go to the glands and thus they are excreted together with your perspiration.

Sweating To Good Health
One more thing that happens when the body is immensely producing sweat is burning calories. Was there any chance that you felt a little bit hungry after you got out from a steam enclosure? If so, then that was the effect of the sauna’s burning your body’s calories. If you are consistent with this process, you will certainly find yourself a few pounds lighter than when you first stepped in to a steam sauna. But then again, it is best that you realize that you are not most likely to lose as many pounds as when you are working out. This is simply because doing physical activities still burns more calories compared to sitting in a steam sauna all day.

Article written by Andrew Ellis from www.steamandshower.co.uk experts in steam showers and saunas