Posted in Lifestyle
Author: Editor  Published Date: October 6, 2012  Leave a Comment on What Is The Krampus?

While we’re putting up our tree and Christmas ornaments, many other parts of the world are experiencing their own remarkable traditions.

One of the wildest seasonal traditions in Europe is that of the Krampus. This demonic beast roams the streets of Austria, as well as other Bavarian regions, extending to countries such as Hungary, Slovenia and Croatia. 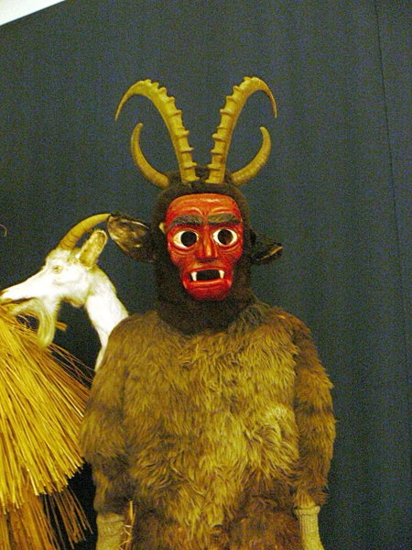 As with the tradition throughout the west, Father Christmas seeks out good boys and girls to whom he will distribute presents. However in these other countries, there is another side to the legend. The Krampus is a mirror opposite of the benevolent and cheery Santa Claus. While Santa rewards the good, the Krampus punishes the bad.

In these parts of Europe, the Feast of Saint Nicholas is held on the 6th of December, in honour of the legendary benefactor. However, the day before is known as Krampusnacht. This rather sinister creature is a companion to Santa, providing something of a malevolent edge to the festivities. Someone in the town will dress as the Krampus, and terrorise (read ‘entertain’) the local populace while stalking for prey.

The beast tends to accompany Santa Claus, but can appear on his own, visiting homes and businesses. There are various variations on the Krampus’ behaviour, but where Santa gives nice toys and sweets, the Krampus hands out coal and ruten bundles. Ruten bundles are birch branches, which are kept in the family home to remind children of the Krampus to keep them in line.

Krampusnacht: More To The Season Than Christmas Ornaments

With his shaggy, hairy body, cloven hooves or claws, the Krampus is already the stuff of nightmares. Add to that a fearsome face, long horns protruding from its ugly skull and often a long, pointed tongue, it certainly strikes a terrifying image. He can be heard approaching because of the chains or bells he shakes, and sometimes he carries a basket or sack on his back, to take naughty children away to hell or devour.

Not only does the Krampus appear on Krampusnacht, but many town also bear witness to Krampuslauf. Usually while inebriated, people will run through the streets dressed as the Krampus, or perchten, mythical creatures of the Goddess Perchta. Krampuslauf can be performed on a single night, or happen many times throughout the season, depending on where it’s held.

The Troubles History Of The Krampus

Of course, such a demonic character doesn’t get away without having critics. Being a million miles away from the traditional Christmas ornaments and trappings of ‘nicer’ celebrations, the beast has been known to ruffle a few feathers. The Christian church has often complained about the appearance of the Krampus, and representations of the character were even banned after the Austrian civil war in the mid thirties.

The tradition was driven largely underground throughout the 20th century, but has gained new ground over the last 20 years. In fact, the Krampus is gaining control further afield, especially with Germanic inhabitants of North America continuing the tradition. You never know, you might find it’s Krampusnacht where you live in the not too distant future…

The Contemporary Home offer a fabulous range of Christmas ornaments which will look great in your home!