What the #@!% is a bed bug? The scientific name for bed bugs, Cimex lectularius, is Latin for “lounging bug” or “bug of the bed”. Not that you would ever refer to them by their Latin name if they infested your house and left welts all over your body, but here’s a few facts you should know about your unwelcomed house guests.

A bed bug is a wingless insect, a parasite that likes to rest during the day and come out when its food source is at rest or motionless, but they are not known to spread disease. 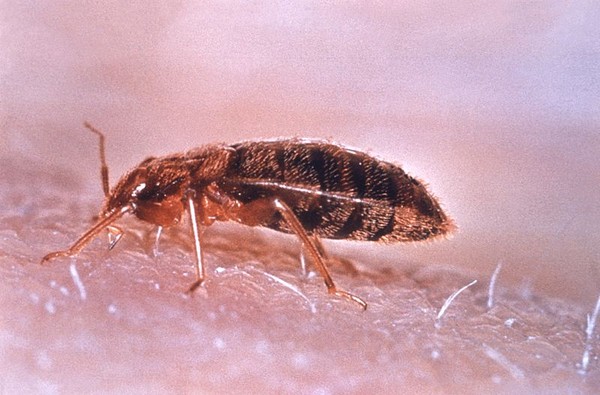 Bed bugs have six life stages and must go through five nymphal stages before becoming an adult (and capable of reproduction). In order for bed bugs to get from one stage to the next they must feed on blood  – such as yours, your pets’, etc. They are almost impossible to see in the first few stages without proper magnification (the tiny translucent or white eggs grow to be flat, oval and with a short head) until they reach adulthood, when they grow to be about the size of an apple seed and turn a reddish brown (because they are now filled with your blood).

The female can lay up to four eggs a day, in secluded locations (like the zipper of your handbag or jacket). Typically, she can lay five to ten a week and up to five hundred in her lifetime.  The tip of the female’s abdomen is pointed. Though you don’t ever want to get close enough to tell, this is useful information to an exterminator. Bed bugs are attracted to carbon dioxide, which we breathe out, as well as to our body heat. They have been known to live up to eighteen months without a blood meal, under ideal conditions. Typically, it is not more than ten months. They prefer to eat in the dark (more privacy, less chance of you being awake and moving0, but they will contentedly chow down during the day if that’s when their host is available. The hungrier they are, the bolder they will be in their hunt for a meal. Luckily, their recklessness increases the chance of you spotting them as they come into more visible places. Their life expectancy is up to one and a half years, but sometimes longer.

1- Bed bugs are only in your bed. They’re not picky about where they hang out- you’ll find them in boardrooms, classrooms, the dentist’s office, movie theaters, and five-star hotels. Oh, and your study, TV room, living room, and…

2- Bed bugs love a good mess. Your home or office can be so clean it shines, but bed bugs are just as happy in a spotless place as a dirty one.

3- Bed bugs are just a poor people’s problem. Tell that to the actor that makes millions of dollars but still had to call my pest control service.

4- Bed bugs are the immigrants fault! It used to be that bed bugs hitchhiked over the border (and the royal families of Europe, immigrants and international businessmen all made excellent transports), but now we’re passing them on among ourselves.

5- Bed bugs are only fans of cheap motels. Believe it if you want, but you’re just as likely to be bitten in a five-star hotel as you are at the local booty motel that rents rooms by the hour.

6- Bed bugs are just a city problem. Some bed bugs love the bright lights of the big city, but their country bumpkin cousins could be waiting for you on your next trip to the burbs or the countryside.

William Hawkins has been in the pest control business for over 15 years, and is currently utilizing the state of the art bed bug heat treatment for Pest Control Jersey City.