Posted in General
Author: Editor  Published Date: July 14, 2012  Leave a Comment on Will Johan Santana Pay A Price For His No-Hitter? 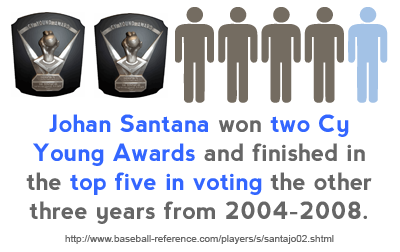 On June 1, Johan Santana threw the first no–hitter in Mets history. It was also Santana’s first no-hitter – he joked afterwards that he had not even thrown one in video games.  Santana, making a comeback from serious shoulder surgery, told manager Terry Collins that he was not coming out of the game regardless of his pitch count. Santana got the no-hitter, but he ended up throwing 134 pitches.  His previous career high was 125. Santana’s no-hitter left him with some of the best numbers in the National League – 2.38 ERA, 1.03 WHIP and 68 strikeouts in 68 innings.  But it also left him with renewed risk.

Before the season, it was not even clear if Santana would be ready for Opening Day. Santana’s shoulder surgery for a torn capsule had caused him to miss the entire 2011 season.  Now Santana was attempting a comeback at age 33. Few pitchers had successfully recovered from this type of injury.

Plenty of rest between starts

It’s not simply the number of pitches that can put stress on a pitcher’s arm, but the situation.  A pitcher may throw only 90 pitches, but be constantly pitching out of trouble with men on base, adding to the stress. Now imagine throwing 134 pitches trying to achieve the first no-hitter in the 51-year history of the Mets.

On June 25, 2010 Arizona pitcher Edwin Jackson threw 150 pitches in no-hitting the Tampa Bay Rays.  Jackson finished June with a 2.11 ERA for the month. The Diamondbacks gave him two extra days of rest before his next start on July 2.

In five July starts that year, Jackson’s ERA was 7.24. At the end of the month, the Diamondbacks traded him to the White Sox.

As with Jackson, Santana received an extra two days rest before his next start after the no-hitter.  It’s possible that Santana, like Jackson, will struggle in the starts following the no-hitter, as he did when he gave up four home runs against the New York Yankees in his first start back.

But it should also be noted that Jackson didn’t pitch poorly for long. He had a 3.24 ERA for the White Sox in the last two months of 2010, helped the Cardinals win the World Series in 2011 and had a 3.17 ERA for the Nationals through the end of May in 2012.

So even if Santana pitches poorly in the starts following his no-hitter, like he did against the New York Yankees in his first start back, it does not necessarily mean you should give up on him. Santana may not be 26 as Jackson was when he threw his 150-pitch no-hitter, and Jackson was not comeback back from major shoulder surgery, but Santana has already defied the odds twice – one by coming back to again be a top pitcher and then by pitching a very unlikely no-hitter. Who’s to say this determined, proud pitcher can’t keep defying the odds?