These days, it is easy to take technology for granted, today’s smartphones allow us to perform a wide range of computing tasks, connect to the internet and, of course, have conversations over mobile networks. But it hasn’t always been this easy – let’s take a look at two of the earliest forms of communications technology which allowed historical pioneers to get in touch across wide expanses of land.

Hydraulic Telegraph: a Greek Classic
The ancient Greeks developed many technologies which would go on to shape the world we live in today: The hydraulic telegraph system developed in 4th Century BCE Greece allowed messages to be sent across wide areas via an ingenious network of identical hilltop water-containers.

The system worked by placing encoded rods into the containers: these would have markings on them all the way up their lengths – when the water level was at the height of a set marking, this would correspond to a specific code;

When two stations wished to communicate with each other, a torch would be lit at either hilltop: once the two were in sync and ready to transmit messages, a signal would be indicated via torchlight; then, both operators would open up the taps on their water containers, draining them of fluid at identically calibrated rates.

When the transmitter noted that the water had reached the level of the appropriate encoded level marking, their torch would be lowered, indicating that the receiver should fasten their tap to stop the water flow on their container.

This synchronised system allowed messages to travel quickly across vast networks in the Mediterranean and could be seen as one of the earliest wide area networks developed by mankind.

The Semaphore: a Revolutionary Design

During the height of the French revolution, Britain, Austria, Prussia and a whole gallery of France’s enemies surrounded the country’s borders: in order to give this proud nation a tactical advantage, The Chappe brothers started work on developing a system which would allow intelligence to be rapidly transmitted across the country.

By 1791, a message translating as: ‘If you succeed, you will soon bask in glory’ was transmitted across a distance of ten miles, using a combination of encoded panels, codebooks and telescopes.

This system relied upon the weather being clear enough to transmit signals, since essentially, it was optical in nature; the Chappe brothers carried out experiments to determine if such a system could be used after dark, however, these proved to be unsuccessful.

The semaphore was operated by manipulating two movable wooden arms, which could each represent seven different positions; the cross-bar could be angled into four different positions, meaning that a total of 196 symbols would be possible with this system: by combining these symbols with a code-book, a reasonably secure network could be formed which would eventually cover much of France, with a total of 556 stations dotted around the country helping to improve networking technology a step further.

Peter Philips is a networking guru who specialises in business VOIP technology. 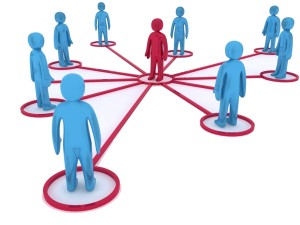