Coming up with original characters is hard.  You have to give them back story, motivation, personality,  nuance, a consistent worldview. Who really has the time? Fortunately over the years writers have devised various shortcuts to save effort on this kind of thing. One of the best ways to do this is to simply think of a word and add the word “Doctor” in front of it. Is your character a bad person? Doctor Doom! Your character has bizarre magical powers? Doctor Strange! He has four robotic limbs on top of his four regular limbs? Doctor Octopus! He’s a time traveller whose true identity is a mystery? Just call him the Doctor- Doctor Who was the name of the show, not the character. Jeez. 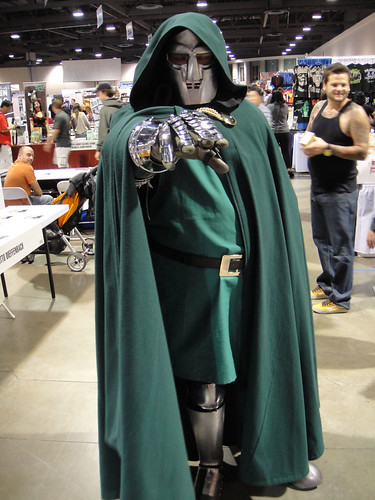 And the best part is, you can get away with it because it turns out real doctors are just as bugnuts insane. For instance:

Doctor Zorro
Actually going by the name Doctor Allan Zarkin, this doctor was a man who was proud of his work. Which, y’know, is okay. Who doesn’t feel great when they’ve done a good job at something? Of course, there’s a crucial difference between being pleased with your work when you’re, say, a painter, or a writer, or, y’know, Zorro, and being pleased with your work when you’re a surgeon. This difference is, surgeons aren’t supposed to sign their name on a piece of really good work they’ve done.

Doctor Zarkin, a doctor described as “larger than life” and “a little nutty” by colleagues, didn’t get that memo, and so after a particularly bang-on Caesarean section that he felt just demanded some recognition, Zarkin carved his initials into his patient’s skin. The patient got $5.5 million in damages as a result.

Doctor Skive
Just as there are people so pleased with their work that they want everyone to know about it, there are also those of us who really just want the next paycheque. These are the clock watchers, the Ferris Buellers of the universe. Hell, the only reason I’m typing this article right now is that it’s not my turn in the game of Facebook Scrabble I’ve got going and nobody’s posted anything interesting on Twitter for a while, and if you’re reading this now I’m willing to bet real money that there’s probably something more important you should be doing as well. In one job I had I skived off work halfway through the afternoon because I had to nip home and give the flat a bit of a clean. That’s fine, that’s normal.

But you’ve got to pick your moment. For instance, even if you need to get your paycheque deposited so that there’s enough money in your account to cover the bills, you probably shouldn’t sneak out of work while someone is lying face down on your operating table with their back opened up while you’re performing extensive spinal surgery. Hello David Arndt!

During an all day spinal surgery marathon David Arndt was repeatedly asking nurses to check if his paycheque had arrived. The moment it did, he asked another doctor to watch the patient for “five minutes”- the universally accepted code for “literally any amount of time”, and walked out the hospital and drove off to the bank. When the patient found out he was left lying with his back open for half an hour while is surgeon ran some errands, he decided to sue for malpractice. Hopefully the court date doesn’t clash with anyone else’s surgery.

Doctor Badass
Not all our comical doctors are incompetent, but they are all, to a greater or lesser extent, totally insane. So, let’s talk about Dominique Jean Larrey, a surgeon in Napoleon’s army. This was the 1800s, so Larrey faced many problems that modern doctors do not, even aside from the fact that he was doing his job in the middle of a battlefield. You’ve no access to anaesthetics, most of the procedures for transporting wounded troops, battlefield amputations and open-wound surgery haven’t been invented yet, hell, nobody’s even thought of the idea of field hospitals yet.

Most doctors under these circumstances would get used to the sight of people dying a lot, but Dominique Jean Larrey said “To hell with that!” and went on to invent all that stuff I said hadn’t been invented. The first ambulances in recorded history was a bunch of French artillery that he commandeered and converted for transporting medics and wounded personnel. The (now universally accepted) rule that all wounded soldiers should receive equal medical treatment was his idea.

This idea, it turned out, would eventually save his life, as when the Prussians shot and wounded him he was saved from a death sentence because he’d treated the enemy commander’s son. Meanwhile, Napolean and the Duke of Wellington, bitter arch enemies, could both agree on the awesomeness that was Dominique “I once did 200 amputations in 24 hours” Jean Larrey. While retreating French soldiers would literally crowd surf Larrey away from enemy lines so that he would be the first one to safety, the Duke of Wellington gave orders that nobody was to fire on Larrey and his troops just because, hell, that guy rocks.

Chris Farnell is a freelance writer who works with Locum Jobs. Despite having never completed a PhD, he prefers to go by the name “Doctor Awesome”.