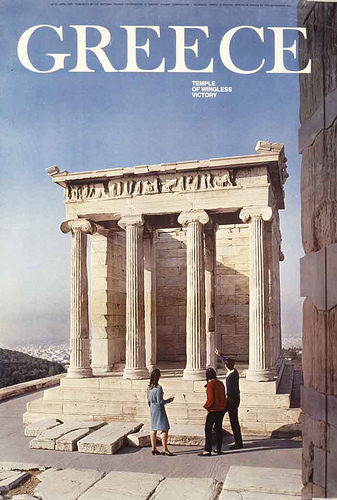 The Greek economy has been in serious trouble for some time now, to the extent that many economists predict that the whole Euro currency could collapse should Greece not exit. The prospect of this happening is very real, with some senior figures across Europe even claiming it could happen on January 1st, 2013. Given the perilous economic conditions across Europe, many believe this could happen even sooner.

Would the tourism industry in Greece sink or swim were this to happen?

One of the main problems with reissuing the drachma in Greece would be that its value would immediately fall massively, and create further tensions across the country and Europe as a whole. However, what that would then do is to make Greece an exceptionally cheap holiday destination for people all around the world. With Greece out of the Euro, they would immediately steal a march on other countries who have struggled financially, yet remain in the single currency.

Looking at you, Spain and Portugal!

Those two countries, in particular, would suffer massively if Greece were to leave the Euro and subsequently be able to cash in on an influx of tourists heading to the country on cheaper holidays.

Or is it Bust?

The biggest question around the tourism industry in Greece is whether it would be able to sustain itself in the short term with such meagre resources and a weak national currency. One particular problem could be for tourist operators, hoteliers and restaurateurs in the country who rely on exposure to western markets in order to attract visitors. These businesses will lack the money to do so or be paying a vastly inflated price for the privilege.

It is believed that 15% of the Greek economy is made up of tourism, however if money is tight throughout the country, travel operators are unlikely to get the short end of the stick when it comes to the distribution of resources.

Ultimately, should Greece leave the single currency there will still be a huge level of uncertainty surrounding the future of the whole country, let alone the tourism industry. Should Greece look to recover and make itself attractive to tourists in the long-term, it will need to develop a clear plan so that tourists are able to boost the economy through taking cheap holidays, while also ensuring that they have the resources in place to deal with an influx of visitors to the country.

Touristorama is a leading online travel website that is dedicated to promoting Greece and the Greek islands. Touristorama provides quality information on what places people can go to when they visit Greece.

I am Susan Hannan from Exams Key; it gives 100% NS0-504 test exams. Let’s take benefit of CAP test Exams material efficiently and get guaranteed success. Check out free demo of all certifications Exam.