Matt Kemp is an extremely gifted athlete and a highly skilled baseball player. Since his major league debut during the 2006 season Kemp has steadily developed as a player from intriguing prospect to MVP runner-up while becoming a favorite of those who play daily fantasy sports. That incredible progress came to sudden halt when he injured his shoulder during the 2012 season and required season-ending surgery. Kemp is incredibly disciplined when it comes to his work outs and defied the odds by being back on the field to begin the 2013 season. However, it was soon clear that he was not ready and the shoulder was still an issue on both offense and defense. Kemp has incredible heart both on and off the field but tried too hard to be there for the Dodgers and it has cost him essentially the entire 2013 season. 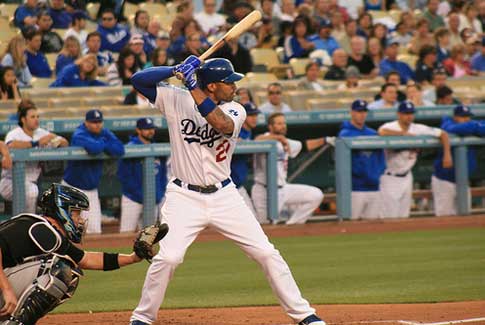 Many players have successfully returned from shoulder problems but it does take time. Even when players are able to return quickly, they often do not see the return of their power until several months later. Kemp now seems past the shoulder injury but has developed a hamstring injury that has delayed his return indefinitely. He recently hit four homeruns in one simulated game but was unable to run the bases due to the hamstring issue at the time. When he does return – at the very end of the season or in the playoffs – Kemp may finally be healthy but the lack of competitive baseball activity could initially make him look sluggish or rusty. That may create an opportunity for daily fantasy sports owners going into the 2014 season.

Kemp has been a very durable player over the years especially when you consider his position and aggressive style of play on the base paths. He is a workout freak and possesses baseball skills that go far beyond his speed and strength. However, most fantasy baseball league owners tend to experience a great deal of “what have you done for me lately” bias. If Kemp ends the 2013 season in as mediocre a fashion as he began it, and there is a strong possibility that will happen, most fantasy owners will avoid him or expect a heavy discount on his typical draft position or auction price. This creates an opportunity for the advanced fantasy baseball owner who understands that injuries happen and that the 29-year old Kemp is likely to be a very good player in 2014. Kemp is still likely to come at a discount in 2014, by watching ADP trends and mock auctions, savvy owners will have advanced knowledge of his likely draft round or auction price and can act accordingly.

The Los Angeles Dodgers do have a bit of a logjam in their outfield. With Kemp out of the lineup, Andre Ethier has become the center fielder with rookie Yusiel Puig in right field and the veteran Carl Crawford in left field. Kemp could become the left fielder which could decrease his value in some leagues. Carl Crawford has suffered a few injuries this season but has mostly played through them to have a decent comeback season. However, at least one of Crawford or Ethier (whose declining power makes him an average player at best) is very likely to be moved in the offseason with the Dodgers eating a gigantic portion of the contract. The result should be increased statistical production for Matt Kemp as he continues his progression towards the National League MVP.

Jon Williams writes for a variety of fantasy sports websites.