Last Christmas, it became clear that mobile was at the forefront of consumer technology. The growth of mobile devices and Internet is evident in the quantities sold last holiday season, with some 6.8 million Android and iOS devices activated on Christmas Day alone (more than double the amount of Xmas 2010), never mind the tens of millions sold throughout the quarter. Digital Marketer is saying that mobile is “the greatest self-selection marketing tool ever invented.” 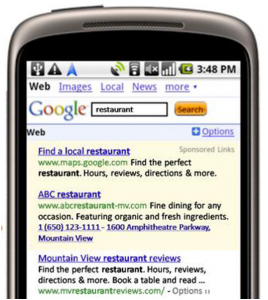 In addition to the astronomical hardware sales, consumers are buying more from their smartphones/tablets. There is predictable fare like e-books, mp3s and mobile apps, but users are also doing more shopping for goods and services from their touchscreens. Black Friday sales were up nearly 7 percent; 40% of those sales were to online sites and 10% of those sales were done on a mobile device, according to Forbes magazine.

It’s not news that mobile advertising is and will continue to be a huge force in marketing. As new platforms rise to prominence, advertisers are devising new ways to ply their trade. QR codes, in-app ads and SMS have become popular options and won’t likely fade into the darkness without a fight. However, nothing in the rough and tumble world of mobile marketing lasts forever.

The next step in mobile marketing is geo-targeted ads. Platforms like Groupon Now have created an environment that targets the mobile user while on the go with geographic location data culled from the phone. Similarly, mobile advertising platforms can pull this data and send ads to the application, via SMS or any reasonable method, to give the user a more relevant ad experience.

Google, never being content to sit on the sidelines when it comes to advertising, has introduced Google Wallet, a smartphone application that allows you to enter financial information and essentially create a facsimile of your plastic (including credit, debit and gift cards) and pay for goods with a tap of your smartphone. The service has existed for some months now in the wild, though only through Citibank and a handful of influential brands like American Eagle Outfitters and Starbucks.

What will the future hold for mobile marketing? Glad you asked!

Groupon Now and Google Wallet are innovations driven by retail. That will likely continue, but a huge factor in mobile marking over the next year will be the presidential election; this election will mark the first presidential election to take place in this type of mobile Internet environment and that will be reflected in the applications available for your devices.

The New York Times has already released a mobile app that focuses specifically on the election and other news hubs will likely follow suit. Individual candidates are taking a page from Obama 2008’s play book and relying heavily on social media; these savvy candidates know how to rally support as well as integrate mobile apps into their campaigns. Some campaigns have even used Square to collect donations for candidates, which gives that campaign a way to raise funds and build an email list as well.

Internet and mobile TV will also see growth in 2012, which will give video advertisers a unique opportunity to get ads in front of eyes on the small screen. The future is now, and marketers who do not know that are in for a rude awakening!