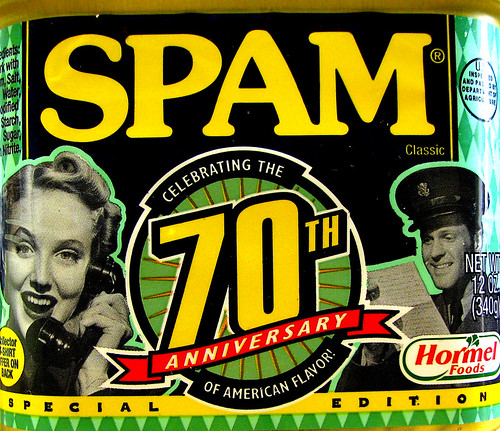 Imagine having a trademark that’s been around for almost a century, and searched for millions of times a day globally. That would probably be the best business venture ever. Unfortunately if your brand is SPAM, that would not be the case.

There are many urban myths about how “spam” became the nickname for junk email. A reliable one is the myth of the Monty Python sketch. In the sketch, a restaurant has SPAM in every dish, and the diners and staff sing a repeated chorus of “Spam, Spam, Spam, Spam, lovely Spam, wonderful Spam.” When early Internet “criminals” wanted to clutter up litter someone’s precious email space, they would use lines of the word “SPAM.” Hence a star was born in the world of online villains.

When it comes to selling meat in a can, SPAM is absolutely fantastic. According to Hormel, the brand owner, the company had already sold 3 billion cans of their product by 1980. Today they have sold over 7 billion cans. So what does Hormel have to say about the misuse of the word “SPAM” to mean something bad? Well to be totally honest, there isn’t much that they can say. They attempted to stop  a few anti-spam software developers to stop using the word in their brand, but it did not work. They have lost total control of who uses the word SPAM. In reality, it could be worse. Ever heard of the saying “no publicity is bad publicity?” If that’s the case, then SPAM will never stop being popular.  Their brand is global.

Every so often, a trademark owner loses control over a brand name because it becomes so becomes so popular. People will start referring the brand name to something else, whether it is good or bad. Until a word becomes prey to its own success, trademark lawyers always write out a list of “generic” words which at one time had an honored history. An example of this would include words like Aspirin, escalator, dry ice, and zipper. Trying to stop others from using these words is a problem.  In Hormel’s case, it still controls the right to use SPAM for its meat product.

So what other brands have other meanings that are not so flattering?

5. Kool – Aid. It’s a cheap and refreshing drink, available in a variety of flavors. Now many people   use it to refer to someone or a group of people being brainwashed. That’s because of the Jonestown massacre in 1978 that was led by Jim Jones.

4. Mickey Mouse. The original meaning is a much-loved character from Disney. Over time it has become the meaning for being amateur or having an ill-judged plan or idea.

2. Barbie. A Barbie is a fashion doll created by the company Mattel. Currently it’s being used to describe a certain type of woman.

1. SPAM. SPAM is a tasty meat that comes in a can. Now people use it to refer to junk email.

Pearce Corbin is a contributor to many DIY and home improvement and business related sites. In his spare time he manages light bulb products on http://www.myprojectorlamps.com/